Epidemic will have limited impact on trade 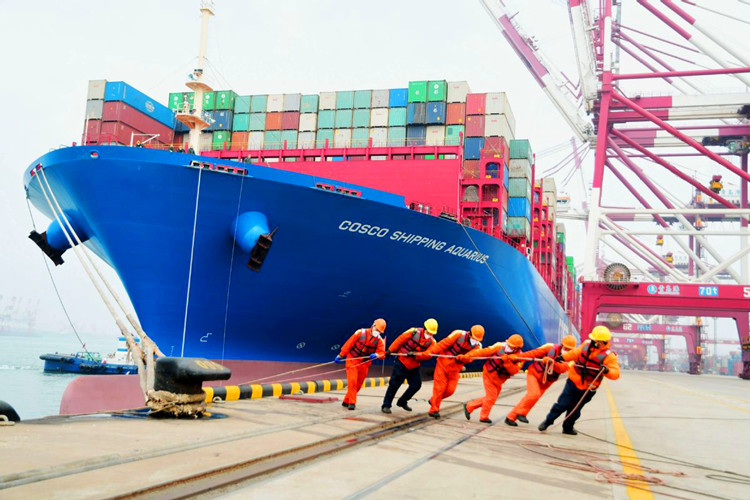 When the World Health Organization announced the new virus outbreak was a Public Health Emergency of International Concern (PHEIC), it made it clear that it opposed countries imposing travel or trade bans on China.

But more than 10,000 international flights to China have been canceled due to the impact of the epidemic. As the "world's factory" and a major country trading in goods, China is the largest trade partner of more than 100 countries and its manufacturing industry accounts for 25 percent globally, restricting China's trade and personnel exchanges with other countries will not only impact China's exports for a short time, but also undermine the stability of global supply chains and world economic growth.

In the short run, the epidemic's impact on China's exports will be larger than that on imports. To cope with the adverse impact of the epidemic on China's economy, the country has launched macroeconomic and fiscal measures to support China's imports and exports. And the global supply chain will rapidly recover in the second quarter as the epidemic is effectively brought under control.

The extended Spring Festival closure of businesses due to the epidemic has not only hit the catering and tourism industry, but also international trade. But after the epidemic is curbed, the consumption that has been constrained will be rapidly released and there will be an explosive growth in imports and exports.

The new virus outbreak will impact China's exports in the first quarter of this year. But international experience shows that the five PHEICs that have previously been declared only had a temporary impact on the economy of the countries where the health threat emerged.

Hubei province has been suffering the most because of the virus, but it only accounts for 1.5 percent of the country's total exports, which means the outbreak's impact on China's exports in 2020 is expected to be limited.

Although the epidemic has had a negative impact on China's imports, in the full year it will drive imports up, because China has just signed the phase one trade deal with the United States to import agricultural products and foods worth $100 billion, and there will be increased imports of medical supplies and medicines because of the epidemic.

The epidemic will mostly impact the tourism industry and airline companies as many countries have imposed travel bans or canceled flights to China. But some other trade in service items, such as cross-border payments and software services, will not be affected by the epidemic, and may even grow rapidly. In general the epidemic's impact on the trade in services is controllable.

China should enhance countercyclical adjustment and resolutely propel reform and opening-up. Exports and imports should be promoted, especially cross-border e-commerce and the digital economy.

In particular, the government should first cut tax and administrative fees to support imports and exports and foreign trade enterprises.

And second the authorities should provide financial support to export enterprises, especially in virus-hit regions, to satisfy their credit and loan demands. In terms of monetary policy, the central bank should reduce interest rates and the deposit reserve ratio requirement appropriately to maintain reasonable and sufficient liquidity, and reduce actual interest rates based on loan prime rate reform.

Third, in terms of industrial policy, the digital economy and modern logistics industry should be promoted, and intelligent manufacturing as well as the enterprises' digitalized transformation should be advanced.

Imports, not limited to medicines, should also be boosted. Trade liberalization and facilitation should be promoted by enhancing multilateral free trade agreement, construction of the Belt and Road Initiative as well as trade and investment with the European Union, Association of Southeast Asian Nations and the African Union.

China's economic basis has changed since 2002-03 when the severe acute respiratory syndrome (SARS) outbreak took place. China's per capita GDP has increased from less than 10,000 yuan at that time to more than 70,000 yuan ($10,056) today, and China's total GDP has increased from 13 trillion yuan at that time to nearly 100 trillion yuan today. Meanwhile, China's foreign trade dependence has reduced from 51.3 percent to 31.8 percent, meaning that exports are no longer the major driving force of economic growth.

With the successful experience to prevent and control the SARS outbreak, China will definitely win the battle against the new virus and pursue import and export trade growth.