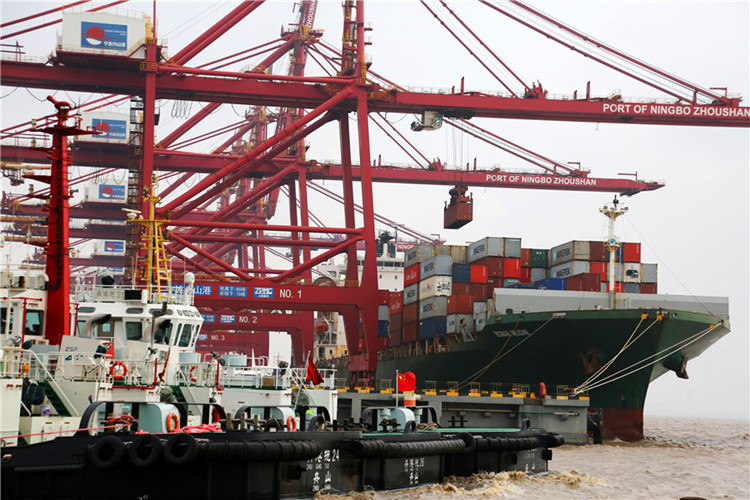 The General Administration of Customs has come out with 10 measures to help in the resumption of work at export-oriented firms and stabilizing trade growth, amid the new virus outbreak in the country.

The measures are aimed at increasing the support for foreign trade enterprises in the country and ease their problems, according to a statement released by the GAC on Sunday.

Customs will simplify business registration and filing procedures, and offer timely help to enterprises, especially small-and medium-sized ones, to solve their problems in imports and exports, according to the statement.

Another measure is to accelerate the pace of checking and releasing imported equipment for production and raw materials, the GAC said.

Wei Jianguo, a former vice-minister of commerce, said: "At present, the main task for export-oriented companies, especially small-and medium-sized ones, is to take orders. Otherwise, the companies will face difficulties in ensuring their survival."

As some are short of orders while some lack capital, companies should cooperate in converging their resources to deliver the orders first, and then share the profits, Wei said.

In this way, companies can not only keep the orders, but also stabilize the market, he said, citing the experiences with SARS in 2003.

The GAC said it will speed up the process of granting permission to agricultural products and food imports, shorten the length of time for quarantine examination and approval, and allow applications that meet the requirements to be submitted and approved at the same time.

Customs will also support enterprises to further expand exports, and will utilize the internet to ensure the stable and efficient operation of the information system, it said.

In a notice that the GAC issued in late January, all Customs districts are required to open special channels to fast-track clearance services for imported supplies for preventing and controlling the outbreak.

According to the GAC, between Jan 24 and Feb 11, China imported 870 million pieces of supplies for epidemic prevention, valued at 2.84 billion yuan ($407 million).Among them the majority were protective goods like masks, protective suits and safety goggles.

Xu Qiyuan, director of the economic development division of the Institute of World Economics and Politics at the Chinese Academy of Social Sciences, said that policies for supporting work resumption while combating the virus should be planned ahead.

To reduce the impact of the viral outbreak, it is imperative to offer capital to industries in trouble amid the epidemic through targeted tax reductions and temporary short-term financing, Xu said.

Clear standards are needed as well to guarantee traffic infrastructure function smoothly, so as to resume the free movement of people and production activities, he said.