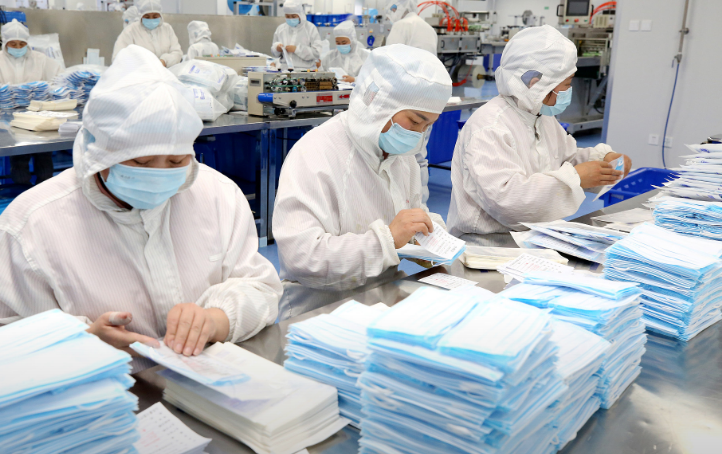 Though the United States launched a trade war against China under former U.S. president Donald Trump, the country still relied on Chinese products to fight COVID-19. Amid the pandemic, Chinese manufacturers have become stable sources of high-quality medical products.

In a factory located in Chengdu, capital of southwest China's Sichuan Province, people are working around the clock to produce syringes and most of the products are scheduled to export to the U.S., as the country steps up vaccination campaigns to combat COVID-19.

An executive says the demand has soared in recent months.

"In 2018, when we just started our business in the U.S., the sale of syringe products for the whole year was about 10 million yuan. But this year, sales in only the first quarter are expected to exceed 30 million yuan. It's almost tenfold growth," said Shi Mingyang, deputy general manager of Shifeng Medical Apparatus and Instrument Company.

Established in 1998, the company specializes in manufacturing various disposable medical devices. When tensions between the world's two largest economies were at their height, the company also came under pressure.

"Though our products were not included in the list of tariffs, many U.S. companies showed concern in cooperating with Chinese distributors, as there were too many uncertainties ahead. So we faced obstacles in developing new clients," Shi said.

According to China's Foreign Ministry, the country has exported more than 43 billion masks to the U.S. since last March, among other products. China has been a major provider of medical supplies to the U.S.

Yet, behind the booming trade, U.S.'s attitude towards China is ambivalent. The Biden administration has announced it will extend tariff exclusions on a series of medical products from China until September 30. Earlier, the Trump administration decided to extend the exclusion until this month.

"Currently, the U.S. needs Chinese supplies to save lives and improve the health of its people. If your people really need supplies from some country, you definitely should wish those countries to be stable, so you can always buy reliable necessities. It makes no sense to disrupt your suppliers when you're really needing them," observed Chen Changning, director of American Studies Center, Sichuan University.

For Chinese companies, they are optimistic about the prospect of the U.S. market.

"It's hard for our U.S. clients to find suitable substitutes in the short term. I think China and the U.S. are both rivals and partners. Their business ties are impossible to be completely cut off," Shi said, adding business people from both countries are expecting a turnaround in bilateral relations, so they can carry out closer collaborations.