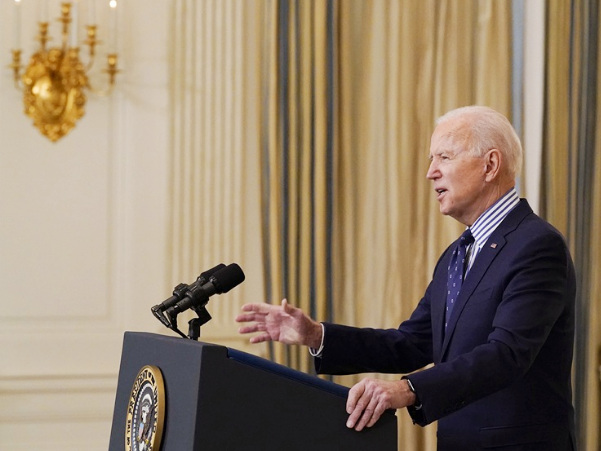 The U.S. is on track for final approval of U.S. President Joe Biden's $1.9 trillion stimulus plan, which is set to boost the country's near-term inflation outlook. However, before the checks reach consumers, Wall Street is now assessing the stimulus' consequences and its impact on the Federal Reserve (Fed)'s rate path. Volatility in the financial market has been quickly rising alongside bond yield.

The stimulus package includes direct payments to the people, unemployment benefits, funding for vaccine distribution as well as coronavirus testing and temporarily increase subsidies for purchasing health insurance. Those benefits clearly aim to help the people going through difficulties as many have yet to return to normal life, and many are still unemployed.

Data shows that gross domestic product in the U.S. stood at $21.4 trillion in 2019, thus the latest COVID-19 relief package equals around 9 percent of the entire U.S. economy that year. Given the impressive size of the package, the latest round of fiscal stimulus has spurred high expectations that it will substantially boost U.S. growth and inflation.

The details above show that the latest fiscal package focuses more on personal spending, which may be able to boost the U.S. growth rate in a short period of time. Consumption accounted for around 70 percent of the entire U.S. economy in 2019, while business investment only accounted for 18 percent. The large size of the stimulus not only provides cash to the consumers but also boosts their confidence and encourages them to spend more, especially when an increasing number of people get vaccinated.

However, not everyone welcomes such a huge stimulus in the near term, such as many investors on Wall Street. The main reason is that these fiscal stimulus plans are going to substantially boost inflation, which is one of the key barometers to the U.S. government bond yield. Many analysts use the 10-year yield as the "risk-free" rate when valuing the markets or individual security, the rapid moves in this rate would create rising volatility in the market.

Rising in bond yield is not the only negative consequence of the $1.9 trillion stimulus package, but fears that the Fed will tighten its monetary policy earlier than previous forecasts are the real concern. After all, recovery in the U.S. financial markets was largely driven by the Fed's ultra-low rates and unprecedented expansion in its balance sheet last year.

Investors certainly understand that the relief bill's impact on the economy may only stay within 2021, thus the recovery wouldn't be solid enough to counter the rising fears of the Fed's tightening. Such a phenomenon has formed a "vicious circle" that further puts the Fed in a difficult position. When the market starts to project a robust economic recovery, the bond yield rises first. The price reaction in the bond market gives the perception that the market anticipates a higher policy rate, which will further encourage traders to push the yield level higher.

Given the backdrop of the boost in growth activities driven by the size of the fiscal stimulus, investors need to face the reality that bond yield may further climb from the current level. In the past, emerging markets have always become the "victim" when rates in the U.S. climbed, because capital outflows from emerging markets tighten the financial conditions in these economies. The good news for Chinese investors is that the impact would be quite limited this time.

The gap between the China and U.S. 10-year government bond yields remains near historical levels, currently at 170bps. When the Fed tightened its monetary policy a few years ago, causing capital outflow pressure in China, the yield spread between the two only stood around 40-50bps. Furthermore, policy divergence also occurred in those days. When the U.S. tightened its monetary policies between 2015 and 2018, Chinese monetary policy leaned toward a loosening bias with a few reserve requirement ratio (RRR) cuts. But for now, the People's Bank of China (PBOC)'s stance is relatively neutral that nearly no market participant anticipates further aggressive policy easing in the near future as domestic economic activities still point to a stable recovery.

However, the yuan's depreciation pressure has been largely eased compared to a few years ago. In the past few weeks, a rise in U.S. Treasury yields failed to spur selling pressure on the Chinese yuan. Some of the modest drops in yuan in this period are mainly due to the higher dollar index. Chinese assets remain attractive to many foreign investors, while much of the capital inflow remains.

Furthermore, the sustainability in the U.S. economic recovery remains unclear at this stage. As mentioned above, the stimulus package mainly targets boosting short-term consumer spending, and whether the re-opening of the U.S. economy causes more virus spreading remains unknown.