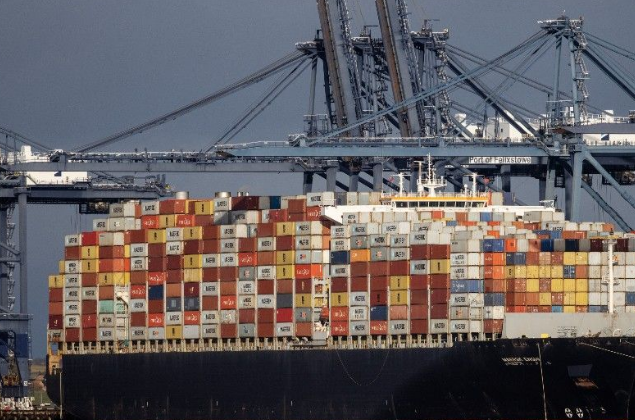 On top of skyrocketing shipping rates, carriers are adding congestion charges for imports to Felixstowe and Southampton, because of severe delays.

The logistics industry has written to the Department for Transport calling for it to help clear port backlogs.

One freight director told the BBC the UK's ports are currently "broken".

Global shipping schedules were initially disrupted during the early stages of the pandemic, but recently a surge in demand for imports and a backlog of empty shipping containers are causing bottlenecks at UK ports.

Adam Russell, who imports home appliances such as heaters and air conditioners for One Retail Group based in London, said the situation is "scary".

He said it's "near impossible" to get goods out of China now because fewer vessels than normal are sailing to the UK and there's also a shortage of empty containers ready to be filled in Chinese ports.

Major shipping companies including Marseille-based CMA-CGM have told UK importers no more bookings can be made for ships sailing from Asia until the last week of December.

The Japanese carmaker Honda said delays at UK ports are holding up imports of parts and production will temporarily cease at its Swindon plant from Wednesday.

The Builders Merchants Federation has also complained of delays for building supplies such as screws and timber, crucial for building new homes.

Organisations representing the UK's ports, shipping and logistics sectors have written to Transport Secretary Grant Shapps, urging the government to do what it can to improve the situation.

"We recognise government's capacity to step in is limited, but where they can, they should look at ways of increasing the capacity for moving containers on and off ports," said Tim Morris, chief executive of ports' trade association, the UK Major Ports Group.

"That could mean running more and longer trains to and from ports, allowing hauliers more flexibility to collect containers out of normal hours, and for drivers to take on longer shifts where that can be done safely," he said.

The letter to the Transport Secretary also warns the government about further potential disruption when the Brexit transition period ends in January.

The Department for Transport said partners across government are working closely with the freight industry to resolve the challenges in the global container system.

Logistics firms which are responsible for transporting goods from ports to warehouses say the situation is creating huge amounts of stress.

"At the moment, we're having an extremely stressful time, to say the least. We've had one staff member leave because she can't take the customers' complaints."

"But we are all in the same boat. We are trying to get people's goods and products into the UK but the shipping rates are changing daily and we're having to update customers and give them the bad news."

Mr Clark said that as shipping orders into the UK have surged, the unloading time for vessels has increased.

That means there are fewer berthing slots available at ports and congestion problems are getting worse.

Problems that have been plaguing Felixstowe for weeks have now spread to Southampton and the system is "broken", he said.

"The increase in freight is either creating more expensive prices for the consumer, or unsustainability for businesses that will be forced to close where the onward price cannot be increased."

He also said poorly performing ports mean the UK risks becoming a "feeder" island, rather than a direct port of call for shipping firms, leaving importers with the added cost of transporting their cargo from continental ports such as Rotterdam or Antwerp.

A spokesperson for DP World in the UK, which operates Southampton port, said: "We have made clear that we are currently dealing with higher than usual yard volumes and also bad weather, including fog, leading to our truck turnaround times being longer.

"We expect levels to return to normal over the next week."