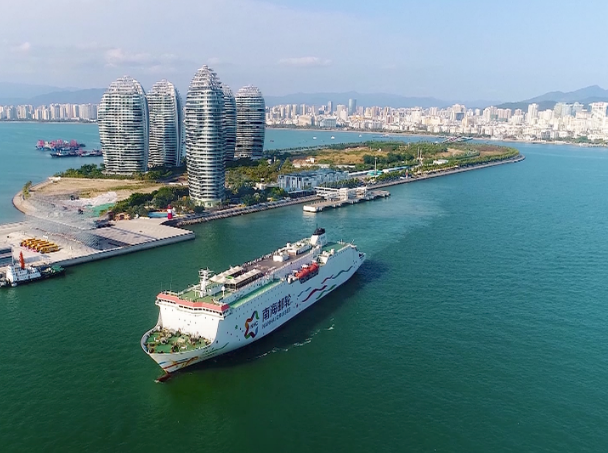 At 0:26 December 1, the first batch of zero-tariff goods was imported to Hainan with a tariff exemption of 3.81 million yuan ($580,000). The goods were meteorological radar transceivers declared by Hainan Airlines, meaning the first zero-tariff list officially took effect on China's only Free Trade port.

The zero-tariff list includes 169 items, ranging from coconuts, coal, chemicals, to components for aircraft and ships.

The list is seen as another step in Hainan's trade liberalization after six months since China unveiled the development plan for the Free Trade port.

"It's not a bonded policy, but a direct zero-tariff policy. It's an exclusive policy in China at the moment," Zhang Huawei, deputy director of Hainan Free Trade Port Office told CGTN. "Compared to the former, the latter is simpler. And it's implemented not only within the customs regulation areas, but on the entire Hainan province, all companies are adapted to this policy."

Xingguang Chemical is a company located in Yangpu, a pilot area in the Free Trade Port. Its new project is still under construction and imports chemical materials and exports its products to Asian countries including Vietnam and Cambodia. "We estimate our profit will reach 100 million yuan to 150 million per year, and thanks to this policy it will save us an extra cost of about 80 million yuan per year."

How will that affect this free trade port?

"79.1 percent of the world's goods shipments goes through Hainan. And we're located in the middle of the RCEP countries – connecting China, Japan, South Korea in Eastern Asia and other countries in Southeast Asia," Zhang Huawei, deputy director of Hainan Free Trade Port Office explained to CGTN, "we are working on becoming an transportation hub of RCEP."

Hainan is over 40 times larger than Hong Kong, 30 times larger than Singapore, and 14 times of the total area of all the other 20 free trade zones in China. Bigger space is Hainan's advantage of developing more diversified industries such as petrochemical industry, service industry, digital economy, high-tech sectors.

While the zero-tariff measures will benefit companies, individuals are attracted by the duty-free policy. Now, Hainan is the only place in the Chinese mainland where people can buy duty-free goods without traveling abroad.

In July, Hainan upgraded its duty-free policy by raising annual purchasing allowance to 100,000 yuan per person and expanding duty-free products categories to 45 including make-up, perfume, jewelry, and wine.

There are four duty-free malls in Hainan, and the one in Sanya City is the largest in Asia. That makes the tourism-pillared island even more attractive to tourists. Some say they go to Hainan during weekends just for shopping.

According to its blueprint, the island province aims to liberalize trade and investment on the entire island by 2025.