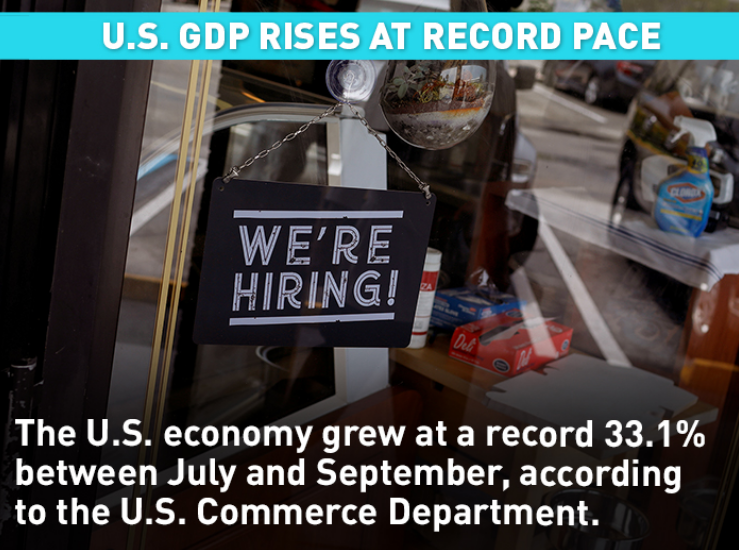 The U.S. economy grew at a record 33.1% between July and September, according to the U.S. Commerce Department.

The sharp rise during the third quarter provided some recovery from a 31.4% contraction in the three months prior, but experts warn the economy is still not recovered from the pandemic.

NPR reports, although government data show a reverse in the economy’s downward trend, that turnaround is already slowing down as COVID-19 infections rise again nationwide.

As customers returned to stores, restaurants and bars, some parts of the economy felt the third quarter jump. But in an interview with NPR,  Nariman Behravesh, chief economist at the forecasting firm IHS Markit said, "There are a lot of jobs in tourism, for example, which we may not get back for five [or] 10 years."

As of September, the labor market was still short 10.7 million jobs compared to employment before the pandemic.

Experts monitoring unemployment rates in the nation are also cautious of the rise in COVID-19 cases.

"The question going forward is going to be whether a surge in COVID cases and renewed measures aimed at containing the virus will lead to another spike in [unemployment] claims in the coming weeks," Jefferies economist Thomas Simons said in a note to CNBC.

According to the U.S. Labor Department, the number of first time filers for unemployment benefits dropped to 751,000 last week.

Economists had expected a higher figure, but Thursday’s numbers are the lowest since the week of March 14, when claims were at 282,000.

Many Americans have been hoping Congress will pass a new stimulus package but with the U.S. Senate currently adjourned, there is little chance any new aid bill could to help those impacted by the virus could be finalized before the Nov. 3 presidential election.