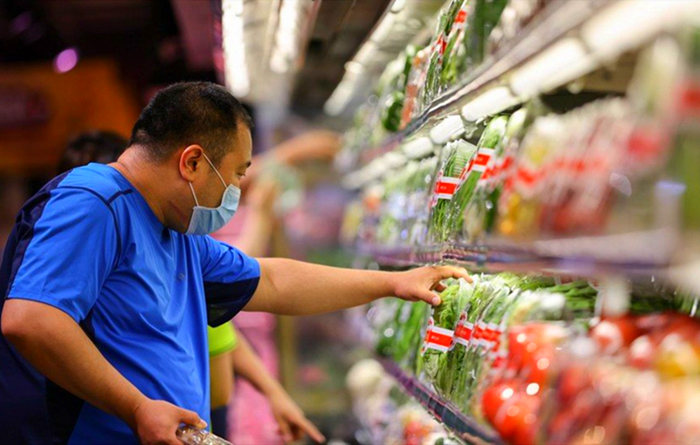 China's retail sales recorded a mild recovery in July to a 1.1% contraction y-o-y, official data showed on Friday, but it is the first time for the commodity retails to grow year-on-year this year, supporting the economy to head for an annual expansion despite a global economic recession amid the COVID-19 pandemic.

Retail sales of commodities in July grew 0.2 percent year-on-year, the first time growth this year according to data from the National Bureau of Statistics (NBS), showing that consumption is on course to continue its recovery from the pandemic.

Retail sales plunged 20.5 percent year-on-year in January and February, when the virus struck in the country.

"With the second wave of outbreak under control, the government will relax its virus control restrictions, which will lead to a boost in consumption, especially services," Goldman Sachs economists wrote in a research note sent to the Global Times on Wednesday.

Last month's manufacturing activity bounced back to an expansion, shown by the purchasing managers' index reading of 51.1, and the industrial added-value rose 4.8 percent in July.

"Looking into the second half, the contribution from investment to the economy will be more evident," Cong told the Global Times.

He added that Chinese residents' consumption power was inhibited by the second wave of coronavirus cases in certain cities, as well as floods in South China in July. "It is likely that in the second half, consumption will only record a mild recovery, given the uncertainties remaining around the pandemic, rather than a V-shaped rebound," Cong noted.

Analysts said that China's economy continued a steady recovery in July, following the trend of the second quarter, while also signaling stronger growth momentum in the second half. "China could achieve positive growth this year, based on the trend," Cong noted.

According to a report by Chinese job hunting platform Zhilian Zhaopin, 26.3 percent of China's graduates were still looking for jobs in June, up 4.4 percentage points compared with the year before.

Although recruitment demand in state-owned enterprises grew in recent months, it was not enough to offset falling demand in private and foreign enterprises, the report said.

Particularly, small and medium-sized enterprises with 20 to 99 employees reported a recruitment demand decline of 28.4 percent from February to June, on a year-on-year basis.