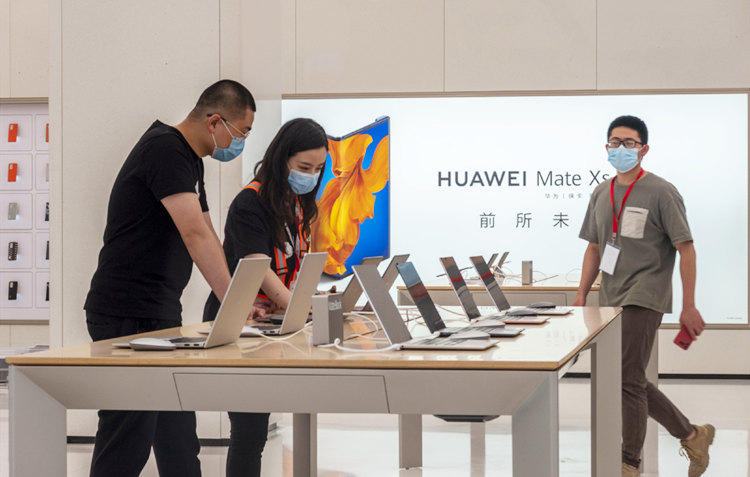 Huawei Technologies Co will team up with global telecom operators to boost the industrial application of 5G technologies as part of its efforts to tap the superfast wireless technology's full potential and generate commercial successes.

The world's largest telecom equipment maker is currently striving to maintain steady progress in its businesses despite the US government's increased restrictions.

"As global 5G deployment begins to wrap up, we need to strengthen our focus on industry applications," Guo said. "This will help unleash the full potential of 5G."

The business case for 5G is not just better connectivity. When technologies like 5G, computing, cloud, and artificial intelligence come together, they reinforce each other and create numerous opportunities across five major tech domains: connectivity, AI, cloud, computing, and industry applications, the senior executive said.

"Huawei has strengths in each of these domains," Guo said. "We can mix and match them to create scenario-based solutions that meet the unique needs of our customers and partners."

Wang Zhiqin, deputy head of the China Academy of Information and Communications Technology, a government think tank, said earlier that unified industry standards and a collaborative ecosystem are needed for industrial applications to be replicated on scale.

Amid the challenges brought by the COVID-19 pandemic and global economic uncertainty, Huawei also called on telecom carriers to focus on both short-term and long-term goals.

During the first quarter of this year, Huawei was ranked the world's largest telecom gear maker, with a market share of 35.7 percent, followed by Ericsson and Nokia, according to market research company Dell'Oro.

The ranking came despite Washington's intensified push to persuade its allies to ban Huawei. In the first half, Huawei clocked a revenue of 454 billion yuan ($64.2 billion), up 13.1 percent on a yearly basis. Its net profit margin stood at 9.2 percent.

But the Shenzhen-based company's fortunes in the United Kingdom recently faced a setback after the British government decided to ban Huawei as a supplier for its 5G network. Other European countries including Germany and Belgium, however, said Huawei will not be banned from their 5G networks.