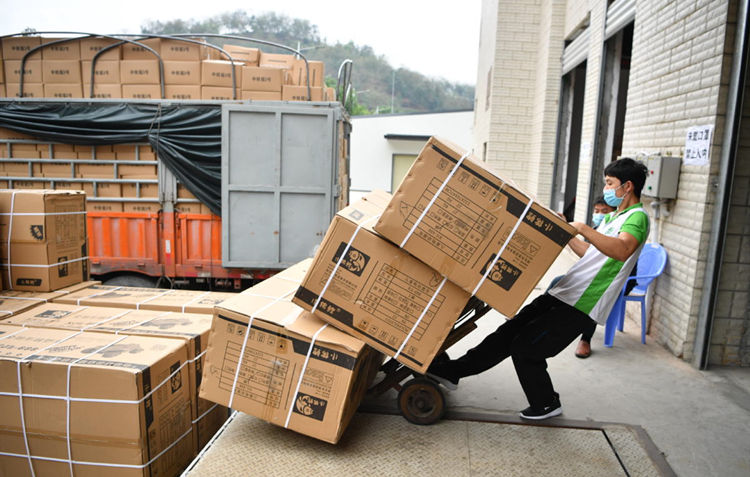 Cross-border e-commerce is expected to play a bigger role in revitalizing foreign trade and accelerating the digitalization push of traditional small and medium-sized enterprises as the country steps up efforts to mitigate the COVID-19 outbreak's effect on trade activities, industry insiders said.

DHgate.com, a Chinese cross-border business-to-business e-commerce platform, said its gross merchandise value (GMV) increased by 30 to 40 percent in both April and May, compared with the same period last year, as the contagion is increasingly coming under control.

The GMV from North America and Europe recorded robust growth. It is noteworthy that sales revenue in Latin America surged by 200 percent in April compared with March, the company said.

"Our business was affected by the COVID-19 outbreak. During the pandemic, the international demand fluctuated and we experienced the ups and downs, but we have also seen the opportunities," said Diane Wang, founder and CEO of DHgate.com.

Wang said that in January and February, factory production and logistics services were halted. As the virus ravaged globally, the international logistics time doubled since April, and the average delivery time in May was about 40 days.

In April, the sales of sportswear, apparel and bags fell by 60 percent and 40 percent, respectively, compared with the 30-day period before the Chinese Lunar New Year.

However, masks and other emergency supplies showed explosive growth. Related sales in early April increased by 72 times compared with the same period in March, Wang noted.

In addition, bath products rose by 18 times in April compared with the one-month period before the Spring Festival. Products such as household tools, laptops, sports and fitness, and leisure games recorded over two times growth in sales.

The 127th edition of the biannual China Import and Export Fair, better known as the Canton Fair, was held online from June 15 to 24 in Guangzhou, Guangdong province and brought precious opportunities for micro, small and medium-sized businesses to showcase their products.

DHgate.com has also rolled out a series of livestreaming programs and recommendation activities targeting buyers from countries and regions involved in the Belt and Road Initiative.

"Products in the categories including healthcare and beauty, mobile phones and accessories, household and garden were favored by consumers during the virtual Canton Fair. Meanwhile, buyers from the United States, the United Kingdom and France contributed to the largest number of orders," Wang said.

Founded in 2004, DHgate.com has become one of the leading cross-border e-commerce marketplaces in China.

In 2019, it served more than 28 million registered buyers from over 220 countries and regions, connecting them to over 2.2 million suppliers in China and other countries, with over 23 million products.

Market consultancy iiMedia Research said the size of the country's cross-border online shopping has been expected to rise to 10.8 trillion yuan ($1.5 trillion) in 2019.

In addition to the 59 cross-border e-commerce pilot zones already set up, the country will establish 46 new ones and exempt retail export goods in all pilot zones from value-added tax and consumption tax.

Shen Yuliang, a researcher with the Institute of World Economics under the Shanghai Academy of Social Sciences, said the pandemic has had an impact on China's cross-border e-commerce, causing delayed logistics services in the short term.

Zhang Li, director of the e-commerce research institute affiliated to the Ministry of Commerce, said cross-border e-commerce has become an important channel for China's foreign trade. The sector is playing a vital role in stabilizing and accelerating the innovative development of foreign trade.