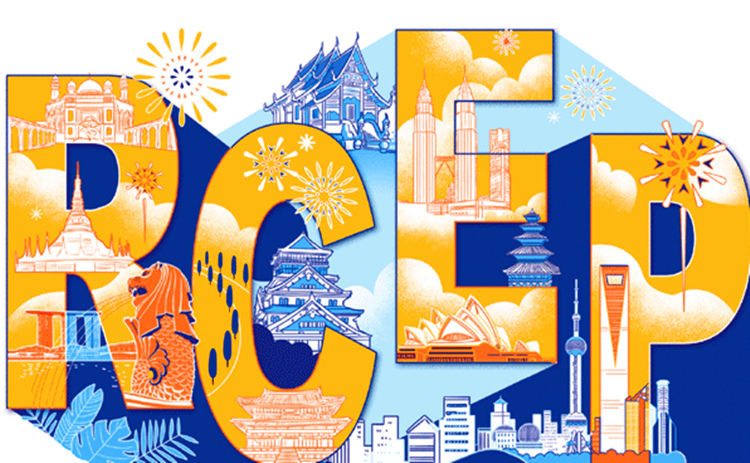 Bloc will provide platform for China, other members to address problems, advance cooperation

India’s sudden withdrawal from the Regional Comprehensive Economic Partnership talks has hit negotiations involving the other 15 countries of the treaty, which is expected to be finalized by the end of this year.

The RCEP is a proposed free trade agreement between the 10 member countries of the Association of Southeast Asian Nations and six of its large trading partners: China, Japan, South Korea, India, Australia, and New Zealand.

China needs to remain open to welcoming India to join the RCEP whenever it is ready, deepen reform and opening-up to benefit countries entering the Chinese market, and mediate among different countries to ease trade frictions to contribute to the conclusion of RCEP negotiations, which can inject fresh impetus to global trade.

With a total population of about 3.5 billion, the trading bloc would have a total GDP of more than US$21 trillion, accounting for more than 30 percent of global trade. If the RCEP is finalized, it will be the world’s largest regional FTA.

The RCEP is more accessible to developing nations. Its framework complements the World Trade Organization by covering traditional issues like goods trade, dispute settlement and service trade as well as new ones, including investment, intellectual property, digital trade, finance and telecommunication.

It plans to cut restrictions and discriminatory measures, especially in the field of service trade. The RCEP can lay the foundation for developing countries participating in the treaty to get involved in higher FTA levels in the future, which is significant for promoting free trade between member countries in the era of globalization.

Since WTO reforms have not yet been launched, the RCEP will offer great opportunities for global trade, especially for China. Due to factors such as the unilateralism of some major countries, the number of permanent WTO judges has come down from seven to three, with the tenure of one of them concluding by the end of this year.

Participation in the RCEP will be an important approach for China to cope with Sino-US trade frictions and to stabilize its foreign trade growth in the short term. In the long term, the bloc is expected to promote China’s high-level opening-up and further its participation in regional integration.

China will further expand its economic and trade partners among RCEP member countries and make greater contributions for maintaining the prosperity of the Asia-Pacific region. It will also share its experiences and help RCEP member countries enhance confidence in free trade and combine the RCEP framework with the Belt and Road Initiative to produce joint results.

At present, all parties have reached consensus on more than 90 percent of the agreement text. However, the China-United States and Japan-Republic of Korea trade frictions, and India’s withdrawal, continue to pose challenges.

India has concerns about the potential negative impact of imports and lacks confidence in the competitiveness of the domestic industry. It has filed many anti-dumping cases against China, and has established a complicated non-tariff system to protect the domestic market.

In this regard, China first needs to encourage member countries to adopt more proactive and pragmatic strategies toward the conclusion of negotiations while respecting ASEAN’s dominant role.

China needs to uphold the principle that the 15 RCEP countries can go ahead with the agreement that is open to India, which reflects China’s openness toward foreign cooperation as well as its determination to adhere to multilateralism and trade liberalization.

Second, some Southeast Asian countries are concerned that domestic markets may bear the brunt of China’s exports once the RCEP treaty is concluded. China needs to further reform and open up, show the huge potential of the Chinese market to enterprises and investors of other countries participating in the RCEP, and encourage countries to invest in China.

The second China International Import Expo, held in Shanghai from Nov 5 to 10, allowed foreign enterprises to see the great returns of tapping into the Chinese market and demonstrated China’s confidence as the world’s largest market. The Foreign Investment Law will come into effect in 2020, when foreign investment and business activities in China will be more secure.

Third, China needs to further play its role as a mediator. Since Japan-ROK economic and trade frictions show no signs of easing in the short term, China needs to respect the dominant role of ASEAN while continuing to mediate between countries as a major power and promoting countries participating in RCEP negotiations to adopt more proactive pragmatic strategies, which can turn risks into opportunities, and lay the foundation for future negotiations for the China-Japan-ROK Free Trade Zone and the China-India trade agreement.

As the world’s largest regional agreement, the RCEP will serve as a multilateral cooperation platform for member countries, provide a new approach for countries to address problems, advance cooperation in the Asia-Pacific region and give new impetus to global trade.