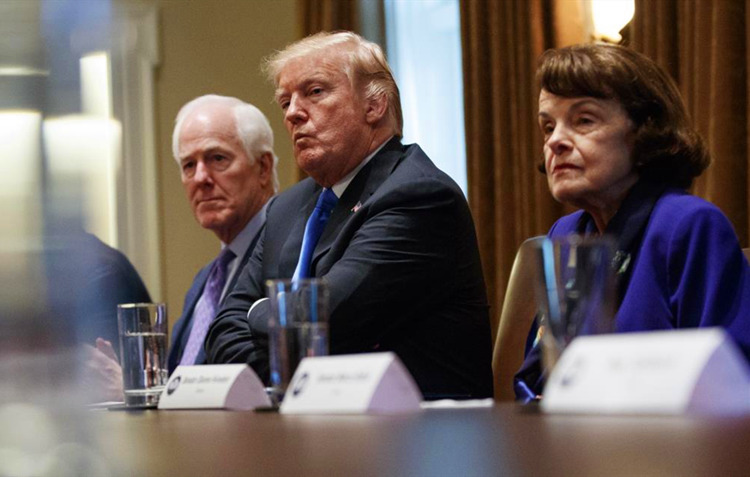 A group of U.S. senators penned a letter to the U.S. State Department on Wednesday urging Secretary Mike Pompeo to "coordinate" with Mexican counterparts and help clarify the country's definition of "essential businesses", in a push to have Mexico resume certain trade activities while it fights the virus outbreak.

The bipartisan group of 11 senators, led by John Cornyn of Texas and Dianne Feinstein of California, is pressuring the Trump administration to work with its third largest trading partner to identify the industries that are tied to the U.S. supply chain, citing fears of continued disruptions caused by quarantine orders by both countries meant to stop the spread of the virus.

The move comes as a handful of states have allowed businesses to partially reopen, while more than a dozen others prepare to follow suit in the coming days – many of which are dependent on Mexican products and services. Industries mentioned in the open letter include food, medical, transportation, infrastructure, aerospace, and defense.

While the senators argue the interruption to the U.S.' supply chain hurts American businesses during the novel virus pandemic, Mexico is also facing a similar dilemma with its shuttered businesses.

Mexico entered what it calls epidemic contingency phase III last week, after countrywide contagion has led to nearly 18,000 infections and more than 1,700 deaths as of Wednesday, with the health ministry estimating a much higher number of cases.

The official phase III declaration means non-essential workers and businesses must continue to cease operations until at least May 30, a move that is taking a toll on the emerging economy. States in Mexico are managing COVID-19 containment measures as they see fit following general guidance from the federal government.

In states like Sinaloa – Mexico's top tomato producing state, which helps supply the vegetable to McDonalds and Subway restaurants – demand for tomatoes saw a 40 percent decline in part because of stay-at-home measures in both countries, according to Reuters. The U.S. imported 346.1 billion U.S. dollars worth of goods from Mexico in 2018.

Mexican President Andres Manuel Lopez Obrador has been widely criticized for his administration's delayed response to COVID-19 and his downplaying of the severity of the disease. Lopez Obrador went as far as encouraging members of the public to hug only days after Mexico's first confirmed infection on February 28 and told people to keep going out in public for nearly a month afterwards.

The two trading partners announced an extension of a month to the March 21 ban on non-essential travel between both countries to May 19.

It is not yet clear when Pompeo will reach out to his Mexican counterparts to seek a clarification of what it considers to be essential business.

Health officials in the U.S. and Mexico warn a premature reopening the economy may further delay containment of the novel virus.