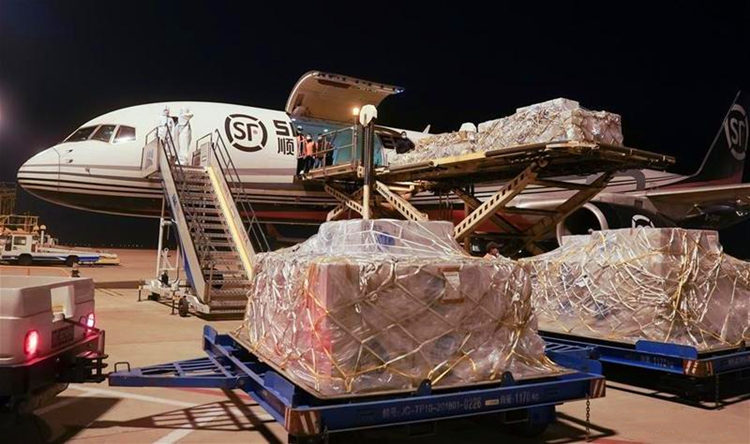 Air freight rates are skyrocketing after the grounding of many passenger flights in Asia has left shippers scrambling to book limited spots on cargo planes as Chinese industrial production restarts, according to industry insiders.

About half of the air cargo carried worldwide normally flies in the belly of passenger jets rather than in dedicated freighters. But deep flight cuts in response to the virus outbreak have made the market more dependent on freight haulers.

Freight forwarder Agility Logistics said on its website that China's air cargo capacity was down 39 percent in February relative to last year because of the passenger flight cuts.

"The price is three times higher – at least - because there is just no capacity," Elbaz said.

Freight Investor Services said in an update to clients on Monday that cargo pricing on China-to-US routes had reached "abnormal highs" and that intra-Asia traffic was up by 22 percent over the previous week. TAC Index data shows China-US cargo rates have risen by 27 percent over the last two weeks to US$3.50 a kilogram.

Chris Mu, who runs a small logistics company in Shenzhen, China, that often uses air transport to supply Amazon sellers in Europe and to transport UK-made car parts for assembly in China, said prices had tripled since before the Lunar New Year and are rising by the hour.

"With reduced options, we have to take whatever we can get, flying goods from the UK to the Netherlands, then from Liege in Belgium to Nanchang in Jiangxi province, just to get them to a factory in Shanghai," Mu said. "For the airlines, it's fine because they're still making money, but it's the middlemen like us who are bearing the costs, and we don't like to go to our customers every day and tell them the price has gone up."

DHL's express volumes have started to recover in China and the company is putting planes back into the network, Deutsche Post AG finance chief Melanie Kreis said on Tuesday, noting that its fleet is a major asset given the grounding of many passenger planes.

On the Chinese mainland, the number of freighter arrivals has increased in recent weeks as factories resumed production.

China's aviation regulator said the number of freighter flights was expected to reach 870 this week, up from 788 in the week starting Feb 17.

"The number of air charter requests we've gotten in the past week are more than the number we've received in a normal quarter," said Brian Bourke, chief growth officer at SEKO Logistics, a Chicago-based freight forwarder.

Most of those requests involved moving goods from China to the United States, he said.