Why China is the partner for Africa 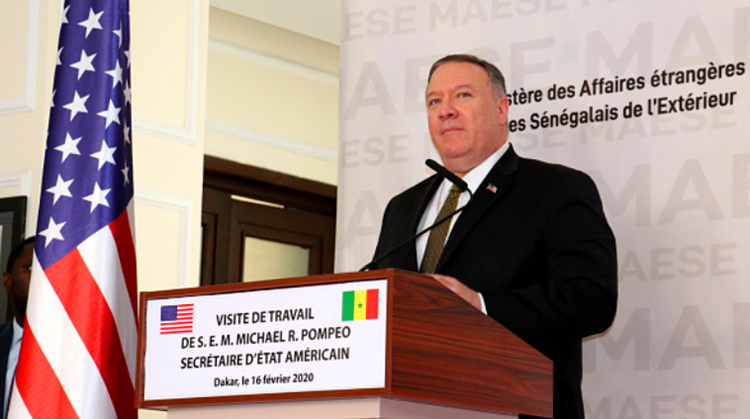 About a month after contending in the Caribbean that Chinese investment in Africa "feeds corruption and undermines the rule of law," the U.S. Secretary of State Mike Pompeo is on a whistle-stop tour to three African countries: Senegal, Angola and Ethiopia. It is the first African visit by an official of the Trump administration in more than 19 months.

Just as African political analysts called his comments "almost hypocritical," arguing that the U.S. companies were not necessarily the cleaner ones, the governments and people of the continent aren't much excited at his arrival as well following the White House's recent travel restrictions on another four African nations: Nigeria, Eritrea, Sudan and Tanzania.

Nigerian former Vice President Atiku Abubakar greeted the restrictions with "sadness" while an Eritrean press statement dubbed the act "unfriendly" and expressed its "dismay." The inclusion in the list of "pariah states" was shocking for the African nations, especially Nigeria that has been conducting a counterterrorism campaign against Boko Haram with America and has sustained a close diplomatic relationship with the U.S. since 1960.

So what Pompeo discussed in Senegal about resolving African security issues was thoroughly contradictory. On one side, he confirmed to Senegalese foreign minister that the Pentagon wishes to withdraw combat troops, leaving its military presence in the areas of training and intelligence and on the other hand, he pledged that the U.S. would work closely with regional forces and European countries in the fight against armed groups.

Subsequent to his flimsy commitment in Senegal to combat terrorism, Pompeo reached out in oil-rich Angola to support Angolan President Joao Lourenco's drive against corruption and to claw back billions of dollars plundered from state coffers. Again, Pompeo's visit to Luanda was largely to secure the interests of American oil companies, including Exxon Mobil and Chevron, in Africa's second-largest oil producer and third-largest economy.

His comments that "we have got a group of energy companies that have put more than 2 billion dollars in a natural gas project that will rebound to the benefit of the American businesses for sure, but to the Angolan people for sure as well" shed light on the fact that he was more inclined to protect U.S. commercial interests in Angola than to extend economic and infrastructure cooperation.

Pompeo is now in Ethiopia, a key U.S. ally in the Horn of Africa that has undergone dramatic political reforms since Nobel laureate Prime Minister Abiy Ahmed assumed office in 2018. In Addis Ababa, Pompeo was due to discuss the construction of a hydroelectric dam project, costing 4.2 billion U.S. dollars, that Egypt fears will dry off the Nile, on which the parched Arab state relies for 90 percent of its water.

Once questioned about Washington's competition with Beijing in Angola and other African countries, Pompeo said that he would leave others to analyze how the U.S. model differs from China's way of business, adding "When we come, we hire Angolans." His comments again drew global attention to American disquiet about Beijing's leading role in developing the most impoverished continent.

In Ethiopia, China-sponsored industrial parks have helped the country to transform its economy and created thousands of jobs, leading the two nations to knot themselves into undeniable and enduring economic and trade relations. Chinese investments in Ethiopian infrastructure, manufacturing and textile sectors show its commitment and its preparedness to meet the economic, social and transportation needs of the country.

After the U.S. shale revolution, American focus on oil-producing African countries had significantly declined. In this crunch phase, China came in to help Angola and increase its crude oil imports from the country. In the first quarter of 2019, Chinese crude imports were 68 percent of total Angolan oil exports.

China also remained a key partner of Senegal in 2019. Bilateral trade between the two countries totaled 2.27 billion U.S. dollars in 2018 while several Chinese businessmen have arrived in Senegal to find potential investment opportunities. In infrastructure cooperation, China has constructed a number of projects including the Chinese-built Diamniadio industrial park.

While Pompeo touts that Senegal, Angola and Ethiopia are "three countries in various stages of development in their transition to democracy and their stability," he tends to impugn China-Africa relations by offering U.S. economic plans. But after ditching U.S. moves and unambiguous strategy to split up their ties with China, African nations would find it hard to cuddle American ideas.

In the changing world, the interests of the entire world are interlaced and no country can align a new ally at the expense of the other. For Africa, China is a valuable and trusted partner that has invariably stood with the continent for decades with unwavering devotion and resolute support.

China's funding of a number of projects without attaching any stringent conditions, respect for African culture and understanding of its priorities and sovereignty, have persuaded the region to reject the West's Sino-phobic mindset. That's why China is highly celebrated as a dependable economic and strategic partner on the continent and more and more African people are turning up to hail its presence and contribution to economic growth in Africa.