the new virus prompts buyers to look closer to home 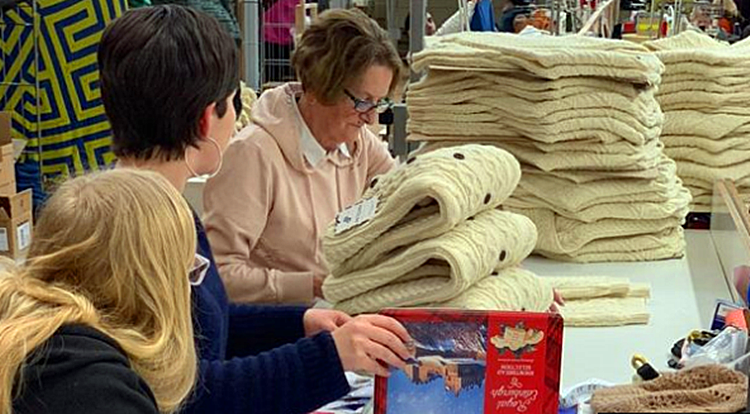 Retailers had discovered they could cut costs by ordering from Chinese manufacturers.

Now though the tables may be turning thanks to the new virus.

"We're seeing an increase in inquiries and confirmed orders coming through," says Bhavik.

Their factory, based in Leicester under the brand Paul James, is located in a sprawling network of long narrow rooms, filled with looms, colourful yarns and expert sewers seated in rows.

Like dozens of British manufacturers in towns and cities across the UK they could soon be piecing together orders for clients they once lost, because the virus is causing chaos for big retailers and their supply chains.

As factories in China remain largely closed, High Street shops are urgently looking at how they can plug gaps for products that are due on shelves in as little as eight weeks.

"A lot of retailers are worried they'll have no stock in the stores soon because so much comes from the Far East now, particularly in textiles," says Kate Hills from Make it British. She set up the new trade body a decade ago when she saw the impact the outbreak of the Sars virus was having on the fashion industry. She struggled to find UK firms to manufacture garments.

"We're so heavily reliant on boats coming from China [but] it takes weeks to get here. We are going to start running out of stock in the stores unless we find manufacturers locally and that's what businesses are now trying to do."

For decades, big British retailers turned their backs on UK garment manufacturers. Hundreds of textile factories in towns across the UK closed as High Street stores preferred to buy cheaper clothes from China.

But the virus has laid bare how exposed global trade is to a sudden shock, as supply lines have been interrupted. It is presenting big opportunities for the factories that did survive to fill those gaps.

"In particular, it is things like seasonal products," says Ms Hills. "We're coming into the season for swimwear and that's nearly all made in China and you're going to start seeing a lack of those products in stores or certainly a lot less than you would have before."

In a survey sent out to her members across the UK, almost 100 responded, describing the increase in demand they've seen.

"All different sorts of products people are looking to make here now: knitwear, dress factories getting increased orders, even demand for face masks - we're being asked if we know people who can make them!"

Bhavik can't divulge who his new customers are, but he thinks it is high time British retailers realised the benefits of ordering closer to home.

"I think in the 80s and 90s, China was very good at investing in its local factories and local production and investing in modern machinery. But now the rest of the world has caught up, and I think it is time for brands to look further afield and spread that production risk," he says.

A product made in a UK factory can reach the shop shelves eight to 12 weeks after it's ordered, much faster than the five to six months it takes to transport it on a boat from China. In that time, a fashion trend may have passed altogether.

Specialised Canvas in Chesterfield has also seen a growth in orders following the virus outbreak. It is one of the only manufacturers in the UK of pathogen isolation chambers, used to transport and treat people with severe infection and health problems. They made chambers that were used for Ebola patients.

As concern about how to treat the virus intensifies, managing director Paul Noble says "manufacturing products for infection control is seeing increased inquiries and orders for products to be used potentially in the treatment of the outbreak".

On the first floor of the factory, engineers Karen and Ellen meticulously put parts of the isolation chambers together. They cut and bond panels of thick industrial plastic into sections. Today they are making funnels so arms can reach inside the chamber to treat patients. They will be bought by the government and used by the NHS, RAF and Ministry of Defence.

The other side of Paul's manufacturing business, which makes bags and straps, is also seeing growth propelled by clients wanting to make more in the UK.

As part of the survey results, manufacturers described how some retailers appeared surprised at the low costs of producing in the UK now, with the added bonus of proximity to the market, cutting transport costs and potentially enhancing their environmental credentials.

"I do know some factories who are turning some of the new orders away as they want to stick with loyal original customers," says Kate Hills. "They're worried they'll come in, place new orders and then go back to China when virus has blown over. They don't want the hassle of working with them anymore."