Inviting designers to BuildMost might not get paid instantly. So what will be your sources of confidence for future payments? 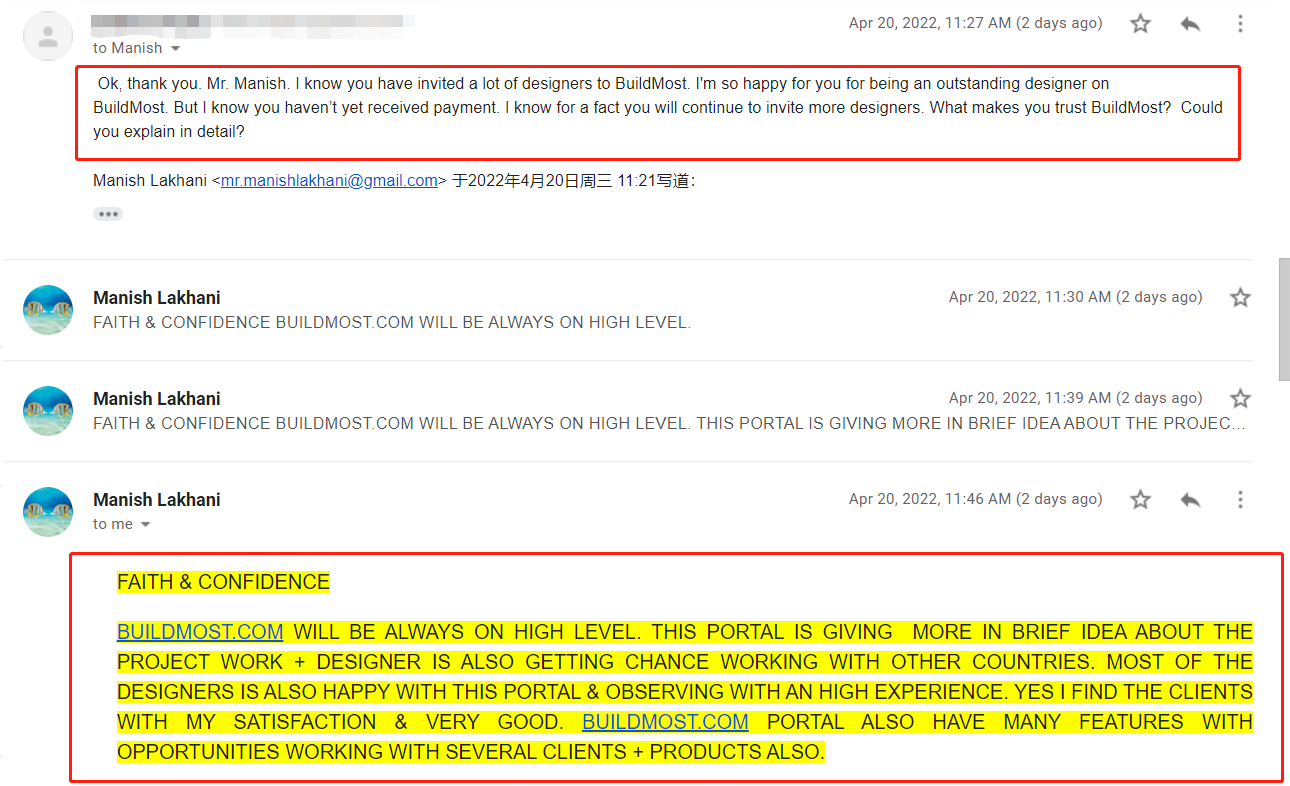 A good beginning is half the job done. Mr. Manish clearly understands what he is doing and uses every method in his hands. Global marketing, personal relations, and getting in touch with many global professional designers are some of his ways of inviting more designers. Mr. Manish also gave advice to other designers on how to invite more designers.

Example of Mr. Manish Inviting Designers to BuildMost: “I found designers from a different segment from digital media + personal contacts + marketing & other channels from my group, then I propose for BuildMost.com I had talked with them about this portal after that. They join & members are happy. I have a very large group & channel globally where people have faith in what I say.”

The advice of Mr. Manish to Other Designers on BuildMost: “My advice is to join this opportunity at BuildMost.com because it is a golden chance where this portal is offering & grab it.”

Another key to success is time management. Prioritizing the things you want to do is a huge part of your success. Mr. Manish is doing his job twenty-four-seven, always ready to achieve what he wants day and night. Some may not think it’s possible to do a job for twenty-four-seven, but if one truly cares about this part-time, one can always squeeze out time in any part of the day and find the chance to participate in this designer inviting part-time.

The answer apparently, is that Mr. Manish has a global team dedicated to inviting designers. The fact that he’s able to achieve such success is human resources well spent. Again, one may not have such a global team to be devoted to this part-time, but one can find and motivate their friends and family to help him/her out and ask around if any designers are interested in joining BuildMost.

How to do things in ways that keep motivating yourself and keep going on and on? One will not persist if he is not truly believing in what he is doing. Mr. Manish is one of those people who truly believe in BuildMost. He has the confidence to work continuously with BuildMost and to keep inviting designers to BuildMost.
BuildMost is founded on the belief that it can truly help global buyers, suppliers, and designers to connect and to match their needs. BuildMost is a continuously expanding platform since its launch, with ever-growing numbers of buyers, suppliers, and design service providers. BuildMost has a young and professional team that is passionate about what we do and has a true belief in BuildMost’s future.

Mr. Manish Lakhani is great at what he does because he’s dedicated, willing to take his time to achieve his goal, grasping every opportunity BuildMost has to offer. A truly dedicated person to this part-time can really achieve anything. Let’s give him a big hand for his dedication.